If the weather matched the times, clouds would shed copious tears. But instead the sun shines, and the sky is ever more blue.

I’ve been sky watching for a while, prompted by the prolonged ‘good’ weather in spring-early summer 2018. After a while the outlook became significant for the absence of clouds, not a common occurrence in these parts... A couple of weeks in I realized there was not the merest wisp, not even a contrail, and it was only later, upon their eventual return that I began to look at clouds properly. It was a good antidote to working close to the ground, was still water (vapour), and I began to enjoy and photograph the clouds per se – just grey proving to be anything but. As yet this project has not seen the light of day due to my regular pre-occupation with the river.

In mid January, we suddenly had a weekend of high pressure which lifted my spirits after a challenging New Year when there seemed to be nothing to celebrate. Little did I realise then what we were about to sleepwalk into… I resolved to take a photograph and composite every blue sky day throughout 2020. This morphed into a parallel thread to take a picture of the sky each day, with or without clouds, so this meant by the time the UK entered ‘lockdown’ I already had something that I could continue by simply stepping out into the garden. Despite everything that was happening, and the unreality of it viewed from the quiet countryside, the sun still rose, and the sky was a constant and calming presence.

Although I thought that extra time at home might let me progress several things that I’ve been itching to try, it’s been hard to motivate myself and creativity hasn’t immediately flowed. On top of that, as the sun came out, it seemed sensible to catch up with the garden before what seemed certain to be the inevitable return of rain...

The strands that I have now begun to work on have been prompted by two things: i) the reduction of personal tragedy to anonymous and startling statistics, in stark contrast to the usual and at times intrusive reportage of any event that results in premature death; and ii) the weather settling fair at the exact moment that we were all told to stay in our homes.

At the end of the month, April wrapped herself in pale grey, as if realising the shame of it all, and shed soft and silent tears. Abandoning her previously gay demeanour she discretely slipped the baton to May.

It’s time I think to let this one go. Each square represents one day in the UK’s lockdown, from 23 March to 30 April, with colour sampled from the sky above me. If you have any comments, or are interested in a print of this on fine art paper, please get in touch. 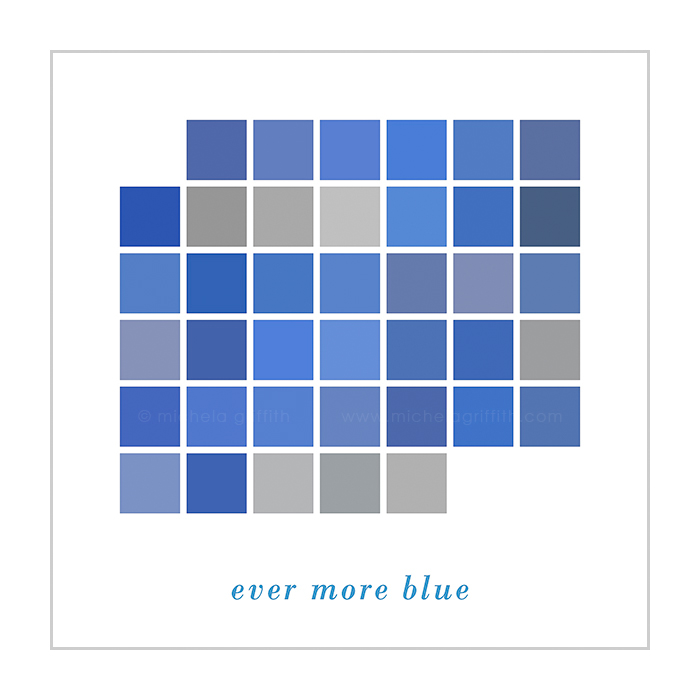